What makes the retrieval of the handshake hard is that it appears only when somebody connects to the access point. When they reconnect, they re-send the handshake. That adds a Deauth step. The catch is that aireplay-ng can do a lot of other things besides deauth attacks.


You might read that airport cards do not support packet injection, but packet injections are for WEP attacks and nobody uses WEP anymore. We only want to send some deauthentification frames. Use JamWiFi. A ready-to-use application is provided there. Once you have selected the access point, you can deauth one or multiple users. It might not work it you are too far from the target as your airport card is far less powerful than the router.

Using airport presents some issues. You cannot know if you got the beacon and the handshake until you stop the capture and try with aircrack-ng. When you launch those lines, the first tcpdump easily captures a beacon and the second waits for the handshake.

It appears you can use less that 4 frames, but it depends on the frames you got for instance 1,2 or 2,3 are sufficient. Anyway you should normally get at least 4. This tool was developed to intercept the network traffic and then use the brute forcing to discover the passwords.

This is why this tool helps a lot while finding the password of wireless network by analyzing the routing protocols. This tool can also be used to crack other kind of passwords. It is one of the most popular password cracking tools. This tool is not just for WEP cracking but various other features are also there.

It is basically used for Windows password cracking. This is the reason this tool is so popular among users. WireShark is a very popular tool in networking.

WPA wifi cracking on a MacBook Pro with deauth

It is the network protocol analyzer tool which lets you check different things in your office or home network. You can live capture packets and analyze packets to find various things related to network by checking the data at the micro-level. 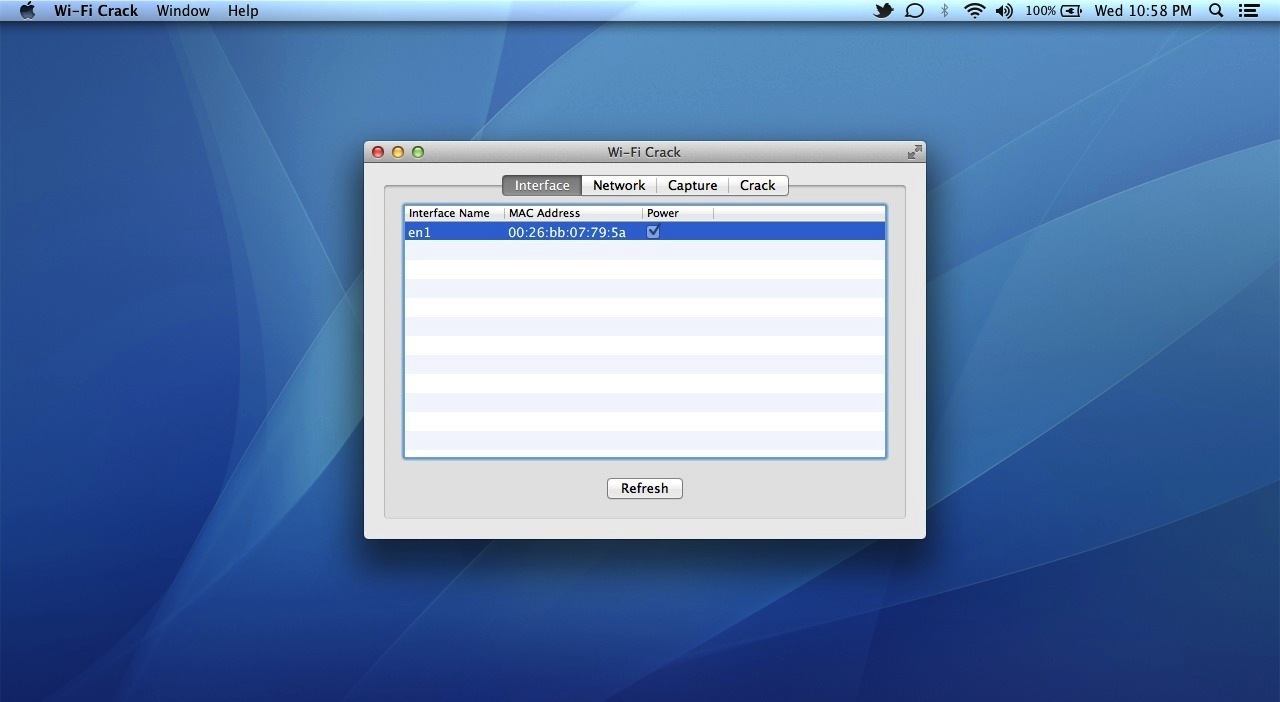 If you are thinking to try this tool, I recommend you to first read about networking and protocols. WireShark requires good knowledge of network protocols to analyze the data obtained with the tool. If you do not have good knowledge of that, you may not find this tool interesting. So, try only if you are sure about your protocol knowledge. Wireshark does is one of the most popular tool in networking and this is why it was included in this list in higher position.

Download Wireshark: Fern WiFi Wireless Cracker is another nice tool which helps with network security. It lets you see real-time network traffic and identify hosts. Basically this tool was developed to find flaws in computer networks and fixes the detected flaws. It is available for Apple, Windows and Linux platforms.

It can also run other network based attacks on wireless or Ethernet based networks. This tool is in active development. SO, you can expect timely update with new features. Pro version of the tool is also available which offers much features. Download Fern WiFi Wireless cracker: CoWPAtty is another nice wireless password cracking tool. It runs on Linux OS and offers a less interesting command line interface to work with. It runs on a word-list containing thousands of password to use in the attack. It means the same password will have a different SSIM.

So, you cannot simply use the rainbow table against all access points. So, the tool uses the password dictionary and generates the hash for each word contained in the dictionary by using the SSID. This tool is simple to use with available commands. With the newer version of the tool CoWPAtty tried to improve the speed by using a pre-computed hash file to avoid the computation at the time of cracking.

This pre-computed file contains around dictionary file for around most popular SSIDs. But for successful attack, your SSID must be in that list. If your SSID is not in those , you are unlucky. Still, you can try this tool to see how it works.

Download CoWPAtty: Airjack is a Wi-Fi This wireless cracking tool is very useful in injecting forged packets and making a network down by denial of service attack. This tool can also be used for a man in the middle attack in the network. This tool is popular and powerful both. Download AirJack: WepAttack is another working open source Linux tool for breaking Like few other tools in the list, this tool also performs an active dictionary attack. It tests millions of words from its dictionary to find the working key for the network. Limited usability but works awesome on supported WLAN cards.

Main reason is that last stable release of the tool was back in April around 11 years ago. So, it does not work with bit Windows OS. It can also be easily detected with most of the wireless intrusion detection systems available. So, you can use this tool for learning purpose on home network to see how it works. This tool is too old but it still works fine on supported systems.

So, I included it in this list. Download NetStumbler: Basically this tool is used by network administrators to find the issues in the wireless networks. Download inSSIDer: Wifiphisher is another nice hacking tool to get password of a wireless network. This tool can execute fast automated phishing attack against a Wi-Fi wireless network to steal passwords. This tool comes pre-installed on Kali Linux. Download and read more about WiFiphisher: KisMac is tool very much similar to Kismet, we added in the list above.

It offers features similar to Kismet and is used as wireless network discovery hacking tool.

As the name suggests, this tool is only available for Mac. It scans for networks passively only on supported wireless cards and then try to crack WEP and WPA keys by using brute force or exploiting any flaw. Download KisMac: This tool is hosted on Google Code and may disappear soon if developer has not migrated it to another platform. It was last updated around 4 years ago. Similar to other tools, this tool can be a good alternate to other tools in the list which use same attack method. Download Reaver: Wifite is also a nice tool which supports cracking WPS encrypted networks via reaver.

It works on Linux based operating systems. It offers various nice features related to password cracking. Download Wifite: We have a complete article on Wifite. Read wifite walkthrough. This tool can guess the WEP keys by performing dictionary attack, distributed network attack, key generator and some other methods. This tool needs few libraries to work. You can read more details on the download page. Tool is not so popular but it is good for beginners to see how dictionary attack works. Download and read more about WepDecrypt: OmniPeek is a packet sniffer and network packets analyzer tool.